Wow, how long has it been since I’ve posted anything that I’ve shot with my Nikon?

But that’s about to change. For those of you who don’t know, I’ve retired from work, and the hubby and I recently sold our house and almost everything we owned and we’re now living full-time in our 24′ Class C RV, traveling the country. We left our home in Tupelo, Mississippi on August 31, 2018, and we’re currently in New Mexico, making our way westward for the winter.

We’ve finally started to get into somewhat of a groove or a routine, and so I *finally* got my Nikon 700 out of my camera bag today and did some shooting. This was primarily a day for getting reacquainted with my camera, trying to remember the very basics of aperture, shutter speed and ISO. I used my 28-300mm zoom lens since we were exploring and I wasn’t sure what to expect.

We’re currently staying at Elephant Butte Lake State Park near Truth or Consequences, New Mexico. The lake is actually a reservoir, but due to the ongoing drought it is currently at about 4% of its capacity. Therefore there is almost a Mad Max desolate feeling about the beach, although there is a lot of wildlife and the park is very popular with RVers and campers.

We were hiking and shooting in the early afternoon when the sunlight was most severe, so after I looked at the results I decided to convert the shots to black and white. I have a real preference for B&W photography, especially for high-contrast images when there is no real interesting color in the shot anyway. 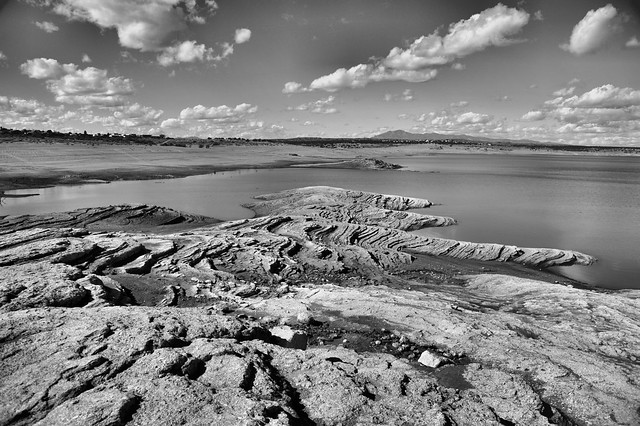 This is one of my favorite shots from today. The ripples in the stone remind us that these rocks are supposed to be under water, but as long as the drought continues, they will be exposed to wind and rain instead.

I’m looking forward to having much, much more time to spend on my photography, now that I am retired and living on the road. I love the Southwest USA, and look forward to capturing much of it through the lenses of my Nikon.

I do still shoot a lot with my iPhone8+, and I post a curated series of those shots to Instagram at Instagram.com/zen_of_zann. I also post iPhone shots related to our RV travels to Instagram.com/JustCallUsNomads. Feel free to follow both those feeds if you’re interested!

Tonight’s post is an HDR image from South Mountain, taken last Sunday afternoon just after the last winter storm had moved out of the area.  The clouds had started to break up and the bright blue sky provided a beautiful contrast to the white and gray of the clouds that remained.

This was my first day out with the 14-24mm F/2.8 wide-angle lens, and it certainly didn’t disappoint, especially on the full-frame sensor of the Nikon D700.  The lens was not only perfect for the interior shots at Scorpion Gulch, it also provided some beautiful wide-angle vista shots of the Phoenix metropolitan area from the mountainside vantage point.

I used the tripod and set the camera to shoot 7-bracket series, using increments of +/- 1 (from -3.0 to +3.0).  I used my new cable release to trip the shutter because I still haven’t completely figured out how to get the camera to shoot the set using the self-timer.  I set the focal length to F/14 to take full advantage of the wide angle.

Here’s an example of what I was able to capture with the new equipment:

For this shot I actually wound up using only five of the brackets, discarding the most under-exposed and over-exposed. There’s a little bit of flare from where the sun was just starting to peek through the clouds, but I kinda liked it so I didn’t try to get rid of it. Make sure you click on the photo to view it large.

On a different note, I got my new flash in the mail today, a Nikon SB-700 Speedlight. I have an appointment on Saturday morning to do a lifestyle portrait shoot with a friend I worked with at the library. She’s just adopted a new dog, so this will be people/pet photography practice. I’m hoping to get a little practice with the new flash as well, even though the shoot will take place outdoors.

Have I mentioned that I love photography? 🙂

We just got back from a four-night camping trip to the Mogollon Rim, northeast of Phoenix, Arizona.  We stayed at the Canyon Point Campground about twenty miles east of Payson, at about 7,000 feet altitude.  The temperatures are about 25-30 degrees cooler than they are here in Phoenix, which was our primary consideration when choosing a campsite (it was about 108° when we left town on Monday).  Of course, my camera equipment was my most important gear on this trip.  I knew that we were going to be out in the National Forest during the new moon, so we should be able to see tons of stars, and my goal was to make my first attempts at shooting star trails.

I have read Harold Davis’ book “Creative Night“, which has some great tips for shooting just about anything after dark.  However, my Nikon D5000 doesn’t have quite all the bells and whistles as a more expensive camera does–plus I’m still a novice at photography in general.  So, although I picked up some good information from his book as well as some other websites, I was pretty much winging it when it came to figuring out exposure times and settings.

Our first attempt (my hubby kept me company on the shoot) was on Wednesday night.  It had rained that day, but by about 9:00PM the clouds cleared out.  There were hardly any other campers in the campground that night, so we just set up the tripod on the road near our campsite and pointed the camera toward the north (I wanted to get a good circular pattern from the stars).  I had no idea of how long to leave the shutter open, so I started with ten minutes.  I have a wired remote, so I stood there with my thumb on the remote button for the entire ten minutes (not realizing that I could just slide it forward to “hold” it open).  I was using my kit lens (18-55mm 1:3.5-5.6) set on manual focus, 18mm, at F/4.  At the end of ten minutes, here’s what I had:

It was a little windy that night, so the trees aren’t all that sharp, but I liked the way I could see star trails after only ten minutes.  So I decided to try a 20-minute exposure:

Longer trails on that one, plus I started picking up more ambient light.  And finally, a 30-minute exposure:

I was very happy with this shot, as I thought it had a nice balance between the star trails and the ambient light which silhouetted the trees.  There was still quite a bit of noise in the photo, however, but I’m not sure how much can be removed without destroying the star trails.

The next night the skies were absolutely clear, but there were more campers in the area–cars driving by, flashlights, campfires– so we set up the tripod and our lawn chairs near the back boundary fence of the campground, as far as we could get from the other light sources.  It was a little spooky, to say the least, since we had to keep our flashlights turned off for the full duration of the exposures.  We knew there were skunks in the area, but we weren’t sure what else there might be scuttling around at night in the woods.  Once again I aimed the camera to the north, but this time I set the aperture at F/5.6.  The first shot was a 40-minute exposure:

It was during this shot that I got buzzed by a bat that came flying out of the darkness, barely visible in the starlight. By then, the temperatures had dropped into the mid-forties, and neither of us had packed our warmest jackets, so I decided to try just one more shot, this time for a full hour. And we almost made it–my battery died after 55 minutes–but I think it was the best shot of the series:

Each of these were shot in raw NEF format and processed in Paintshop Pro X3.  On each one, I tweaked the contrast and sharpened slightly.  On a couple of them, I used PSP’s noise reduction option, but didn’t get the results that I was looking for.

Regardless, I had a great time hanging out in the dark, experimenting with a type of photography that I haven’t done before.  Since we can hardly see the stars at all here in the city, it was a treat just to be able to sit under the night sky and marvel at the vastness of the Universe.  But seeing the star trails in these photos reveals what a wondrous marvel of celestial engineering exists up there!  We lost track of the number of shooting stars that we saw, including one huge, really bright one that left a sparkling gold trail behind it.  I can’t wait to go back and try these again.

I’m hoping that some of my blog readers can offer some tips and suggestions on ways that I can improve my star trail photography.  What equipment do you use for this type of shot? What post-processing steps could I use to make them better?