A couple of weeks ago we had the opportunity to take a flight in a Vietnam-era Huey helicopter as part of a fund-raising event held at the nearby Veterans Memorial Park. They are trying to raise money to install a replica of the Vietnam Memorial wall in the park. There was an outfit there called Sky Soldiers who are made up of veterans who used to fly these helicopters in combat in Vietnam. The Huey that we flew on had been used for medical evacuations, and the guys flying them that day were veterans who had flown these machines in the 60’s and 70’s. They’ve still got it!

We had a blast! We got to sit in the gunner’s well, which meant we were seated on the side of the helicopter facing outward, with nothing but the wind in our faces. It was a sobering reminder of the dangers that soldiers face, being so exposed to gunfire.

Instead of a gun, I had my Nikon, and I was able to just fire off shot after shot as we buzzed around above the city. While they aren’t the most technically perfect photos and they’re not artsy-fartsy, they are a wonderful reminder of an awesome experience.

Here’s one of my favorite shots of downtown Tupelo, looking toward the southwest. Click to view it large for detail!

I’m still going through the photos that I took on our recent trip to the Mississippi Gulf Coast.

This one is really a cliche photo, but I still enjoyed processing it.  Everyone who goes to the coast gets a picture of shrimp boats with the fishermen mending their nets in the evening.  I liked the color version of it, but I was drawn more to the black-and-white image.  I wanted the focus to be more on the lines and shapes of the boats, rigging and the people than on the blue and white of the boat. 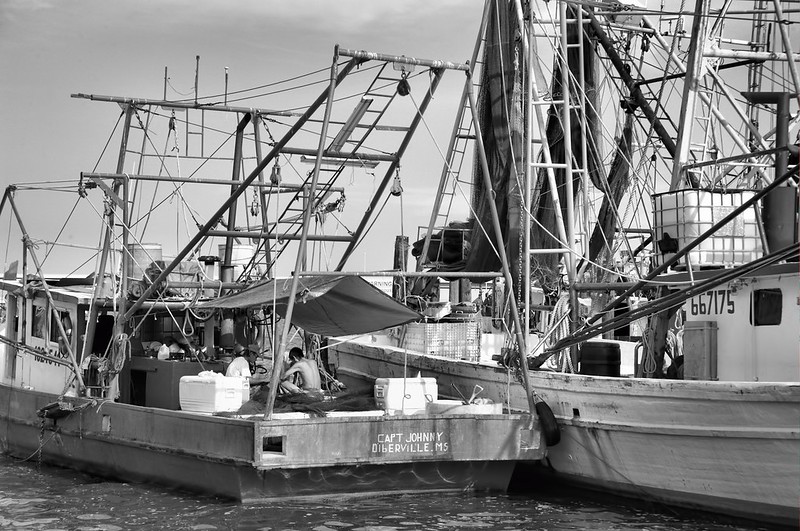 This image was shot with the Nikon D700 and the 24-85mm Nikkor lens.  It was processed in PaintShop Pro X7, using Topaz DeNoise for a little cleanup.  I had to also clean up the sky in the image because I still haven’t had the sensor cleaned in my camera.  That’s my next DIY project.

I’m going to my second meeting of the Southern Light Photography Club tomorrow night.  They’ve asked us to bring a few photos on flash drives to do a show-and-tell for critique.  This should be fun!  I’m taking this one, this one and this one.

Just want to say “Welcome” to my new followers!  Hope you enjoy the images, and I appreciate your interest!