A few weeks ago I purchased the bundle of Topaz products, including Topaz Adjust. Since then I’ve been constantly amazed at what this software can do for a bland, single-image exposure.

Here’s an example of a shot that I took while visiting at my parents’ house last week. The skies were overcast and gray, so I didn’t have much natural light to work with. I was shooting hand-held, and my kit lens is not all that fast, so I had to bump up the ISO setting to get a fast-enough shutter speed to overcome my shaky grip.  Click the images to view them larger: 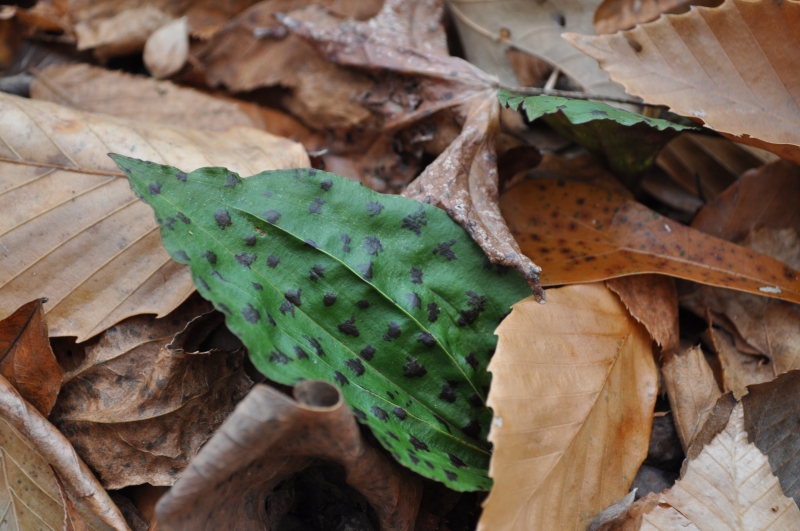 I’m not sure what kind of plant this is, I just found it in the woods behind the house.  I liked the image of the green plant still stubbornly hanging on while everything else was turning brown and dying, but I felt like the shot could be more dramatic if I could recover some of the color and detail that was lost in the soft lighting from the overcast day.  I ran this shot through Topaz Adjust and Topaz DeNoise, with a little post-processing in Paintshop Pro X3 to enhance the edges, and look how it turned out:

Neither of the shots is exactly what my eye saw that day, so I’m not even going to debate which one is more realistic. I just know that I like the second one much better, and that is what my photography is all about–producing images that I enjoy viewing and sharing.

Here’s another example of a Topaz before-and after. 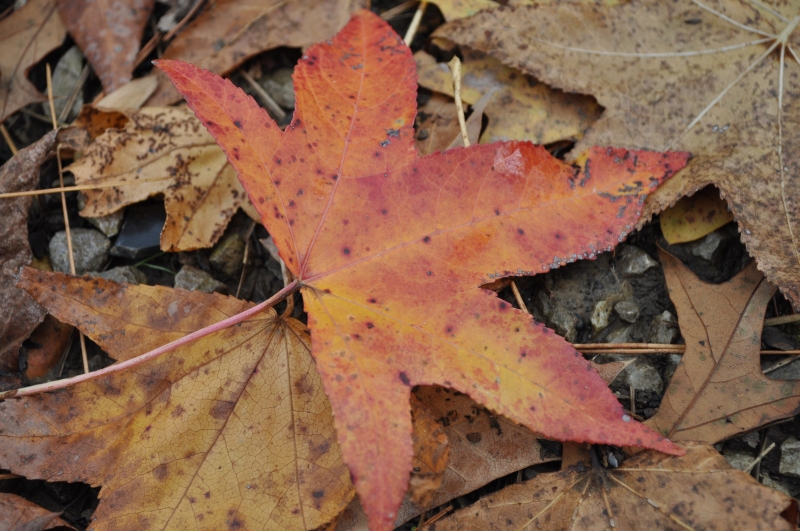 While at my parents’ house I didn’t get much of an opportunity to wander far from the house to do any shooting since we were pretty busy with the family gathering. Instead, I just took the camera outside from time to time and wandered around the property, shooting things that caught my eye.

Sometimes things that seem pretty ordinary can take on an entirely different look when processed in HDR. Here are two examples of just that. These are some of the flower pots and gardening tools that have been put aside for the winter. While they certainly didn’t look like this in real life, I think the HDR process gives them a lot of flair and interest, and makes you notice these everyday objects that normally wouldn’t rate a second glance.

I used Photomatix v4 to process the hand-held bracketed images (-2.0/0.0/+2.0), and then used Topaz Adjust to bring out more of the details and color. I then finished up with the Curves tool in Paintshop Pro X3.

On the shot above, I just noticed that I forgot to crop the edges where the three images were lined up…oh, well, gives it a little bit more pizazz, I think!

I spent last week at my parents’ house in North Mississippi. They are fortunate enough to live on a beautiful lake called Lake Mohawk, and I was glad to see that there was still a bit of fall color remaining when I arrived there last Monday.

The skies were overcast and rainy for most of my visit, however. I wasn’t able to get out and shoot as much as I had planned (my tripod never got used during my visit), and most of the shots I took outside were at a higher-than-normal ISO setting. But thanks to the Topaz suite of products and Paintshop Pro X3, I was able to restore some of the color to these shots that was lost in the flat light of the overcast daylight.

This first shot was made with my 75-200 zoom lens. There is an abundance of wildlife around the lake, including lots of squirrels who like to hang out at the bird feeders that my dad stocks around the house.  I used Topaz Adjust to sharpen it up and bring out the details of the tree bark and the squirrel’s fur:

There’s no cable TV where my folks live…instead, everyone has dish antennas.   There are several dishes on the hill behind their house, most of which are the smaller ones, but there’s still this big dinosaur that’s gathering leaves from the surrounding trees. This is an HDR image created from three hand-held bracketed shots using Photomatix v4, Topaz Adjust, and Paintshop Pro X3:

And finally, here’s a shot of some of the fall color that was still on the trees when I arrived. By the time I left on Saturday, the thunderstorms of the week had pretty much left the trees bare. This shot was processed in Topaz Clean 3, using the “Stylize Details” preset. In Paintshop Pro X3, I used the Curves tool to adjust the exposure, and then I used the Edge enhancement effect to sharpen the edges:

Just couldn’t resist working on one more shot from Lake Mohawk.  While I was out walking one morning, I came across this tree, and I loved the way its branches stretched so far, but in only one direction.  It’s almost as if the tree were reaching for something–maybe the sunlight? I’m just thinking that it could cast some really scary shadows around Halloween time!

This shot was a composite of three bracketed exposures (-2.0/0.0/+2.0), processed as HDR through Photomatix using Tone Compression, and then a little bit of post-processing in PaintShop Pro X3.

As the desert temperatures reach the 110’s and everything in my world turns brown and dusty, I love looking back at the photos that I took at Lake Mohawk, just to remember what a truly green landscape looks like.

On the first morning I was at Lake Mohawk (last Friday), I got up fairly early and walked down the road “a piece”, as they say, to the south end of the levee where I set up my tripod to get some shots of the lake at sunrise.  I was hoping that there would be a good bit of fog on the lake, but I think I got out there just a little bit too late, so there was just a hint of mist left.  I took several series of bracketed shots, intending to process them as HDR images, but as it turned out, the breeze was blowing pretty good that morning, so the foilage produced a lot of ghosting on the HDR’s.

So I went through the individual shots and pulled out some to process on their own, and I don’t think they turned out too bad: 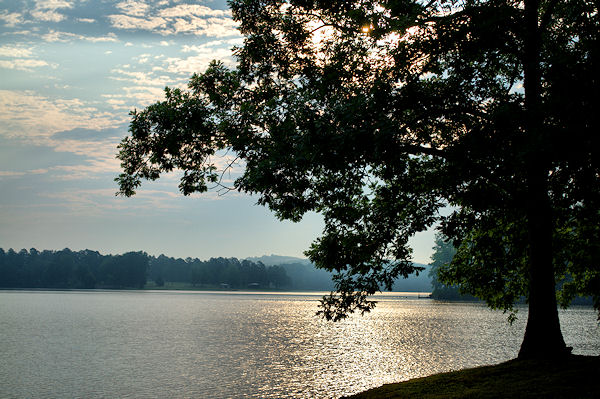 These were all processed in PaintShop Pro X3 from the raw NEF files.  The larger versions look better, and can be seen on my Flickr page in the Lake Mohawk set.  Hope you’ll visit there and let me know how you like these shots as well as the ones I posted earlier.

Also, just want to remind you that I have a separate project in the works at 365Project.org.  That’s where I’m posting one photograph every day, taken with my Blackberry Tour.  It’s actually a fun little project, and I’d encourage everyone to join in and post those candid shots taken with your cell phone!  Or, if you don’t want to post your own shots, feel free to follow me on my project! 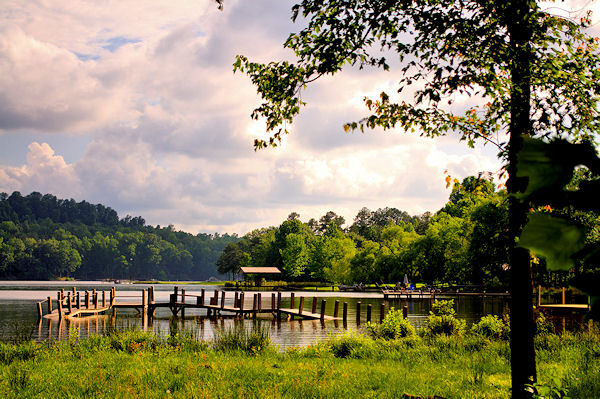 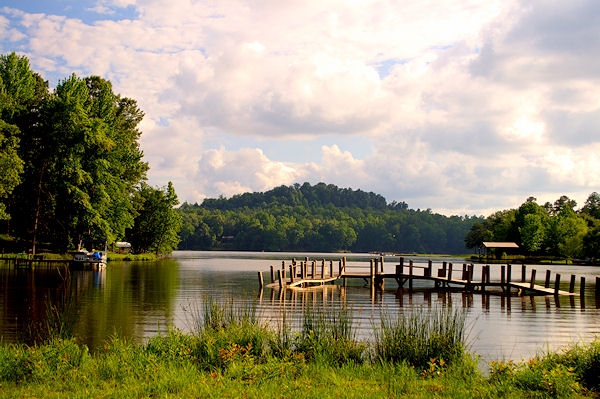 I flew out to North Mississippi over the Memorial Day weekend to visit my parents and other family members.  My parents live in the same community where I grew up, although not in the same house where we lived when I was a kid.  Now they live in a small house on beautiful Lake Mohawk in Tippah County, where we used to go swimming in the summertime.  My parents bought the property years ago.  It was just a little cabin with a screened in front porch, but over the years they’ve added a couple of bedrooms and a bathroom, enclosed the front porch and made numerous other improvements, and they’ve lived there fulltime for I-forget-how-many years.

It’s such a change of pace to visit there in the summertime.  It’s so hot and dry and brown here in the desert, and to suddenly be confronted with all the green foilage and humidity, it’s almost overwhelming.  Even though I spent my first twenty-five years in this area, I sometimes forget just how muggy it can get in the summertime.  But each time I return there, I find myself drawn once again to the beauty of the rural setting and the peacefulness of the lake. 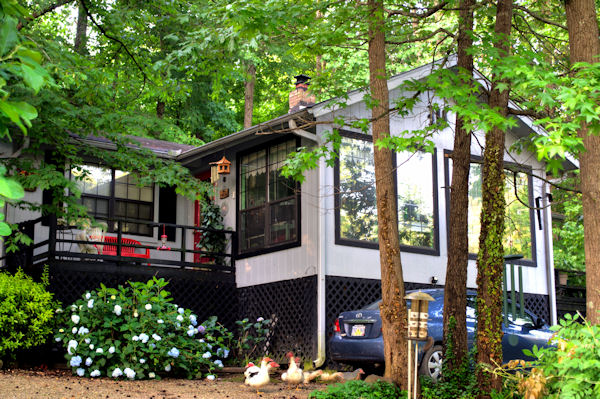 I took all my camera gear with me on this trip, including my tripod, so I could get some good bracketed shots.  It’s been a little while since I’ve done any HDR processing, and I was hoping that the dense shade around the area would present some good opportunities to use HDR to tease out the details in some shots around the lake.  As it turned out, I didn’t have as much time to use my camera as I had thought I would, since I was having so much fun visiting with the family.  But I did manage to get enough exposures to give me plenty to work on this week.  I’ve processed two tonight (shown in this post) just to get an idea of what I’ll be working with.

Both of these HDR images were processed from bracketed RAW shots (-2.0/0.0/+2.0) taken with my Nikon D5000, tripod mounted.  I used Photomatix to combine the images, and then used PaintShop Pro X3 to further enhance them.

It’s pretty late now, and I’m still on Central Daylight Time, so it feels like it’s two hours later than it is here in Arizona.  So I’m going to call it a night and leave you with these two shots.  But stay tuned for more to come later in the week.