On our recent trip to New Orleans by way of US Highway 90, we came across Fort Pike, an abandoned military facility from pre-Civil War days.  We could see it from the highway and thought it looked interesting, so we made an unscheduled stop to check it out.  And we were really glad we did, as it was both an interesting history lesson as well as a perfect setting for practicing shooting brackets for HDR processing.

The walls of the fort contain tunnels with portholes looking out toward the water where the cannons were mounted for defense.  The brick arches and floors were still beautiful, and the light coming through the portholes revealed the green moss as well as the not-so-welcome graffiti that decorated the walls.

I used my Nikon D700 and my 28-300mm Nikkor lens on this shoot. The brackets were made while shooting from a tripod (of course!).

I’ve started processing some of these HDR images and look forward to sharing them!  Here’s the first one that I did tonight. 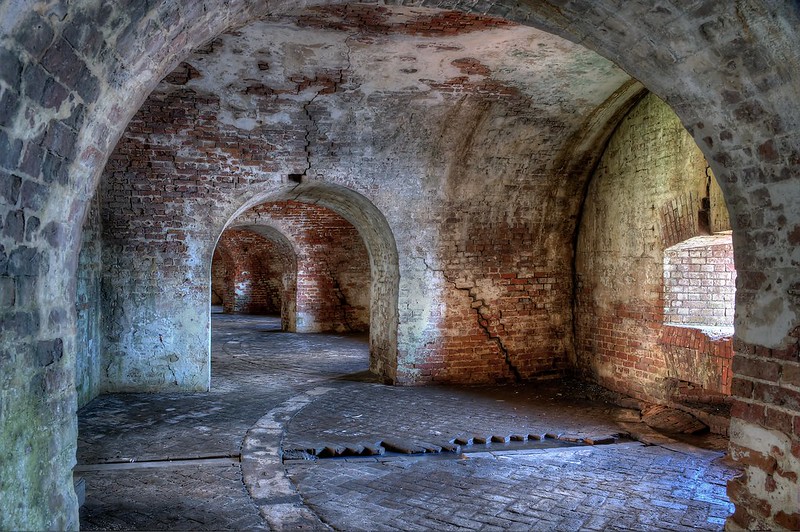 I seem to have a thing for windows and doors.  There’s something about the geometry, the right angles, the textures….not exactly sure, but windows and doors are one of my favorite subjects for photography.

Today’s image is a case in point.  These are the windows in the front of Monti’s La Casa Vieja restaurant in Tempe, Arizona.  Monti’s has the distinction of being the “oldest continuously occupied structure in the Phoenix metropolitan area“.  The architecture and character of these old buildings just lend themselves to making great photographs, and especially to HDR work.

Monti’s is located right across from the old Hayden Flour Mill (check out this shot), another historic structure in Tempe. On our recent photowalk, the three of us stopped in front of Monti’s to shoot the flour mill which was lit up by the reflections of the morning sun bouncing off a large office building across the street. It was only by chance that I turned around and saw the wall behind me with these two beautiful windows. The window on the left shows the reflection of the flour mill, and the one on the right has a reflection of one of my fellow photographers.

If you like my work, please subscribe to this blog and feel free to offer comments. You can also find me on Facebook at ZannWalker Photography.

The closer it gets to Christmas, the less time I have to work on my photography projects.  But tonight I let everything else go, and went back to the digital darkroom to continue working on some of the shots that I took in downtown Glendale several weekends ago.  For this batch, I concentrated on a couple of the historical buildings in the downtown area.

This first shot is the First National Bank of Glendale building, which has been converted into law offices.  Banks…lawyers….kind of typical, don’t you think?  This is a three-image HDR (handheld brackets), processed in Photomatix, then post-processed in Topaz Adjust/DeNoise and Paintshop Pro X3.  I also corrected the perspective in the image since the original shots had the building “leaning backwards”, and I wanted more of a straight-forward shot:

This next shot is the old Sine Brothers Hardware building which is now a city municipal office building. Same sort of processing as before:

If you would like to see the entire series of shots from my afternoon in Glendale, check out the set Glendale AZ 12-4-2010 on my Flickr site.

And if you’re interested in finding out more about these and other historic structures in downtown Glendale, check on the website GoGlendaleAZ.com for more information.

Since my last post, I haven’t been totally away from the digital darkroom….I did work on a few older photos in Topaz, just continuing to familiarize myself with the software’s capabilities.  Here are a couple of shots that I thought came out pretty well: