This morning I was dead-heading my knockout roses, a task that I actually enjoy as it gives me a chance to get out in nature instead of sitting in front of a computer all day. Just as I was reaching into the interior of one of my bushes to clip some old dead blooms, I spotted this beauty just hanging in its web right in front of my hand.  It’s an orb weaver spider, non-aggressive and not dangerous to humans, but I didn’t know that at the time.

I may have uttered an expletive at that point….I really don’t remember. But after I caught my breath, I was just kind of blown away by the beauty of this creature, hanging in its web in the middle of my rose bush. I had my iPhone in my back pocket, so I tried taking a couple of shots with it, but couldn’t get it to focus correctly in the low light.

So I finished up my yard work and then retrieved my Nikon D700 with my 28-300 Nikkor lens and went back to see if the spider was still there. Thankfully, it was right where I had left it (him? her?), and I was able to get a few good shots with some great depth of field. I had the ISO bumped up to 2500 so I could get a faster shutter speed since there was a slight breeze blowing the web back and forth, and with the narrow depth of field I wanted to make sure I stayed in focus.

I processed this in Paintshop Photo Pro V5 with Topaz Adjust. 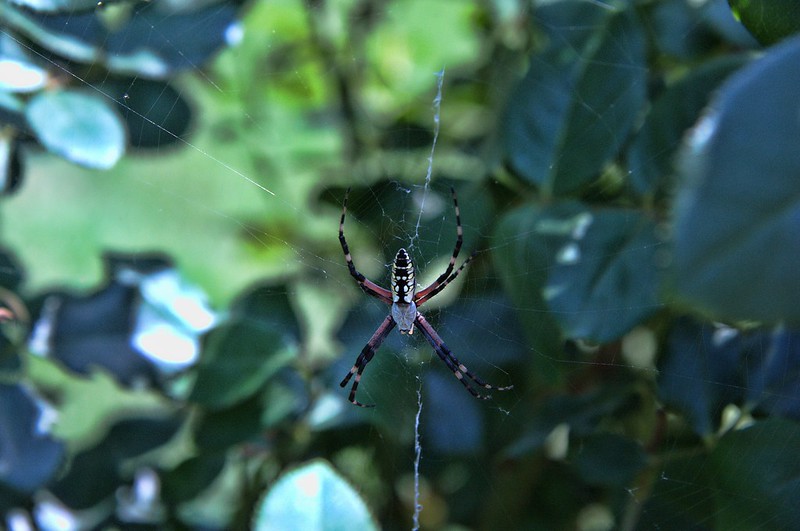 The closer it gets to Christmas, the less time I have to work on my photography projects.  But tonight I let everything else go, and went back to the digital darkroom to continue working on some of the shots that I took in downtown Glendale several weekends ago.  For this batch, I concentrated on a couple of the historical buildings in the downtown area.

This first shot is the First National Bank of Glendale building, which has been converted into law offices.  Banks…lawyers….kind of typical, don’t you think?  This is a three-image HDR (handheld brackets), processed in Photomatix, then post-processed in Topaz Adjust/DeNoise and Paintshop Pro X3.  I also corrected the perspective in the image since the original shots had the building “leaning backwards”, and I wanted more of a straight-forward shot:

This next shot is the old Sine Brothers Hardware building which is now a city municipal office building. Same sort of processing as before:

If you would like to see the entire series of shots from my afternoon in Glendale, check out the set Glendale AZ 12-4-2010 on my Flickr site.

And if you’re interested in finding out more about these and other historic structures in downtown Glendale, check on the website GoGlendaleAZ.com for more information.

Since my last post, I haven’t been totally away from the digital darkroom….I did work on a few older photos in Topaz, just continuing to familiarize myself with the software’s capabilities.  Here are a couple of shots that I thought came out pretty well: