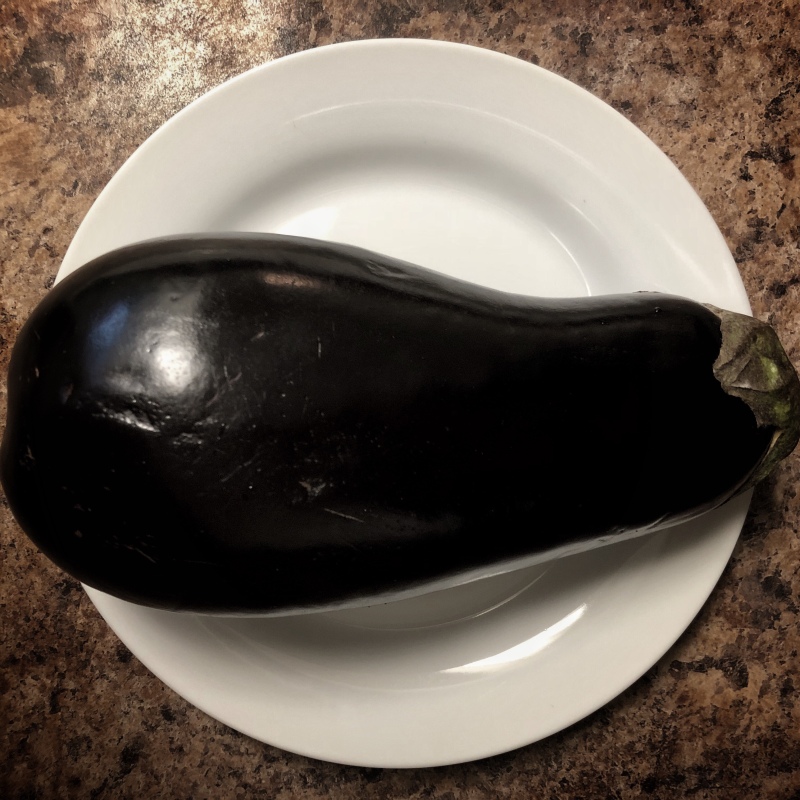 The hubby and I took a daytrip down to the Golden Triangle area this afternoon, about an hour south of Tupelo.  The Golden Triangle refers to the towns of West Point, Columbus, and Starkville, Mississippi, although I’m not sure where the “golden” part comes in.   The primary purpose of the trip was to locate the Golden Triangle Regional Airport, because I have a flight leaving from there in April and I wanted to make sure I knew something about how to get there before the day of the flight.  We found the airport with no problem (and with the help of our handy Garmin GPS device), and then we decided to drive over to Starkville for lunch and coffee.

I had the foresight, for once, to bring along my Nikon D700, a couple of lenses, and my tripod.  Since we weren’t on a tight schedule I took the time to get a few snaps with both the Nikon and my iPhone as we explored some of the downtown Starkville area.  We had lunch at Mugshots Grill and Bar, walked up and down the street a bit, and then headed over to Strange Brew for coffee before heading home.

As we were driving north on US-45, it began to look like there might possibly be a colorful sunset, so we started looking for a side road where we could get away from power lines and traffic.  We wound up about five miles off the highway along a little winding country road where we pulled off the road into a field and set up the tripod.  I shot a few brackets there, but since the clouds were very low and heavy in the west it didn’t look like we were going to get the effect I was looking for, so we packed up the gear and headed back to the highway.

The further north we drove on US-45, the brighter and more colorful the sky became (of course!), until finally I couldn’t stand it any more.  I made a quick left turn off the four-lane onto another small country road, parked on the shoulder and barked at my assistant (my poor hubby) to “hurry, hurry, get the tripod!!” .  I had just enough time to get a couple of sets of seven brackets before the light was truly gone.  And here’s what it looked like after HDR processing in Photomatix: 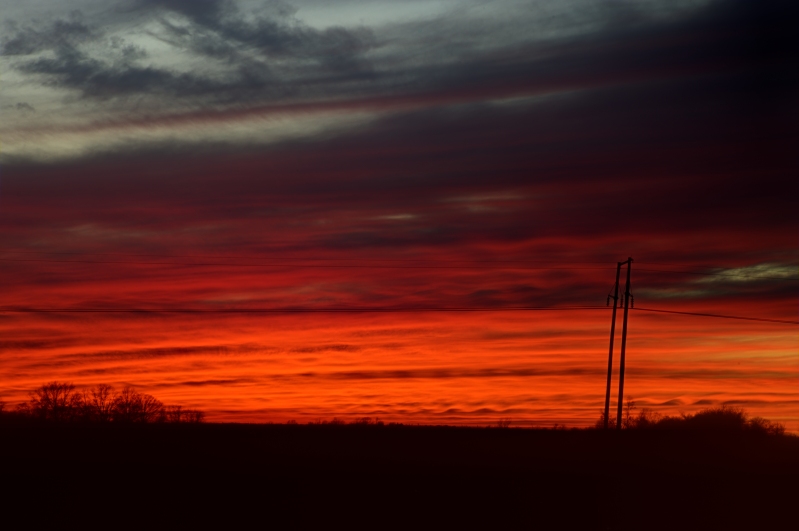 As we drove away, Andy noticed the sign on the little community center building that indicated we were in Egypt.  We had truly gone a long way to get this image!!

I’m still having a blast exploring all the things that can be done, photographically-speaking, with the iPhone4s and a selection of apps.

I’m planning to post a series of reviews of each of the apps I’ve used to date. But to start the ball rolling, I give you this image that I shot and processed this morning. 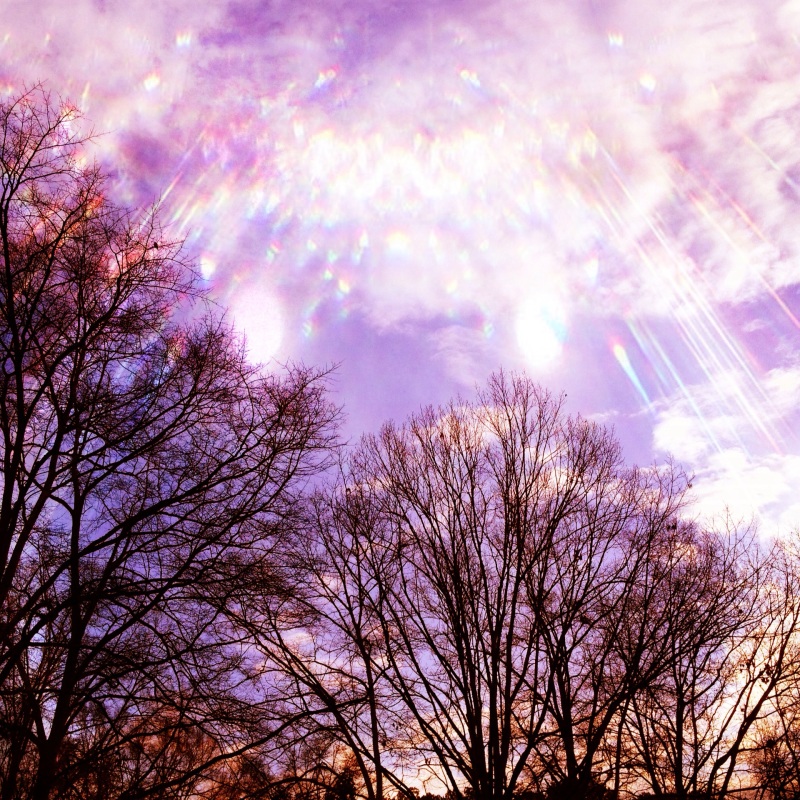 I used the iPhone camera app to shoot the photo. I then used Camera+ to crop and add some punch, and then I used Pixlromatic to add the color and the cool rays in the sky area. Hubby said it looks like the Second Coming. 🙂

I did use my Nikon D5000 last weekend to take photos at the bridal shower for my nephew and his wife, and I used the occasion to practice a lot with my flash. Got some great shots, but they’re all very family-oriented, so I haven’t posted any to the blog. Maybe I will after I look back through them again.

But right now, I’m just enraptured with my iPhone!

I found a great new (to me) Tumblr blog today. It’s Time Magazine’s LightBox, where they showcase some amazing photographs from days gone by. Check it out if you’re looking for some photographic inspiration!

I found this really cool app for the iPhone that lets you combine multiple photos into one image. The app is called Diptic, and it’s available in the iTunes app store for only $.99.

Diptic provides and intuitive interface that allows you to select a layout from the generous selection. You can then fill each space on the layout with an image from your camera roll, or you can take a new photo. The images can be sized, moved around, and even enhanced within the app with the toolset provided.

Diptic is very simple to use. Within five minutes of downloading it to my iPhone, I had whipped out this awesome composite image of my cat, Macho, from three photos in my camera roll. 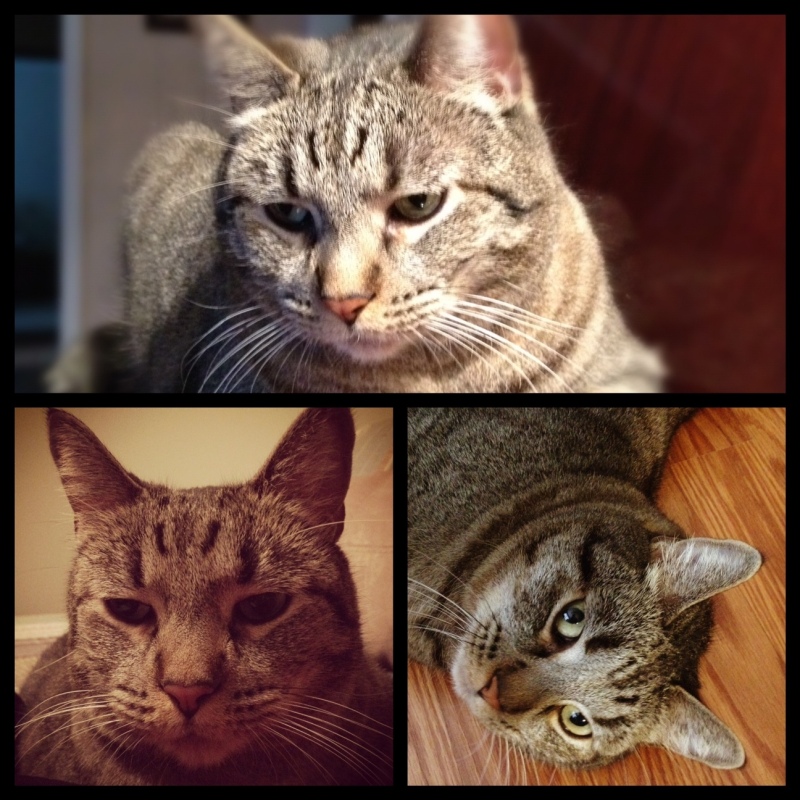 If you’re an iPhone photographer, be sure to take a look at Diptic! And no, I’m not affiliated and I don’t get paid to say this.

Since I acquired an iPhone several months ago, I’ve done a lot of experimenting with its amazing 8-megapixel camera and various photography apps that I’ve picked up.

I decided it’s time to start sharing some of these shots on my blog!

Here’s one that I took today on our front porch. It was raining outside, and I was able to capture the reflection of one of our trees in the puddle of water at my feet. The leaf that was lying near the puddle gives a sense of scale and anchors the photo in time…winter in the South.

Sent from my iPad

Just had to do a little quick processing tonight.  Haven’t had a chance to do much lately.

Took this shot back in February on the light rail ride through Tempe, Arizona.  I saw this lady on the train, and she looked so care-worn and thoughtful.  Such an interesting face.

Tonight’s post is another image of the Arabian Library in Scottsdale, Arizona.  Its exterior walls are a beautiful copper color which positively glows in the sun, especially against the bright blue of the desert sky:

This is a single exposure shot handheld at 85mm, ISO 200, F/6.3, 1/640s. I processed it in PaintShop Photo Pro X3, using Topaz Adjust to bring out some of the details that were lost in the harsh sunlight.

I spent a few hours (and a few bucks) today establishing my new online domain, ZannWalker.com. Over time, I plan to get a website set up to display my best photography, and then eventually start some sort of business from what is now a very expensive hobby. But for now, I just wanted to make sure that I own the domain. It may never amount to anything, but one has to start somewhere.

If you like my work, please subscribe to this blog and feel free to offer comments.  You can also find me on Facebook at ZannWalker Photography.

Tonight I concentrated on processing my shots of the remnants of Mayhew’s Lodge.  I previously posted a black-and-white HDR of one of the structures, but tonight I processed everything in living color.

All of these images are HDR’s created from three bracketed photos (-2.0/0.0/+2.0) in Photomatix v4.  The new de-ghosting functionality came in particularly helpful on this batch of images because of the movement of the foliage in the wind.  It took a little extra time to examine each image, locate the ghosted areas and choose the appropriate exposure to use for the correction, but the results were definitely worth it.

After creating the .TIFF file in Photmatix, I then opened the image in Paintshop Pro X3 and used the Topaz Adjust plug-in.  The presets I used most often were Photo Pop and Clarity, but in most cases I tweaked the presets slightly after applying them.  I then finished up in Paintshop Pro by using the Curves tool to adjust exposure and applied sharpening.  In some cases I bumped up the Saturation slightly.

I’ve uploaded the images to my Flickr site, but here are links (click on the photo to see it large on black):