As I mentioned in yesterday’s post, I had one more shot that I was in the process of editing.  I’ve spent some more time on it, and while it’s not perfect (especially if viewed at full size), it gave me a lot of practice using layers, the Lasso selection tool and the Eraser in Paintshop Pro.  Let me start from the beginning to illustrate.

The second shot is underexposed by -2.0EV.  Notice how this one gets a lot more detail in the bushes outside the windows in the sunlight behind the fountain.

The last one is the over-exposed (+2.0EV) shot.  This one revealed more of the details and color under the roof. 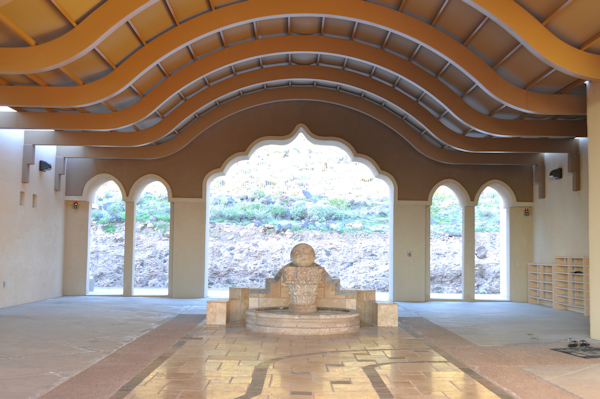 The first thing I did with these shots was to run them through Photomatix to produce an HDR image:

I liked everything about this image except for the burned-out, over-exposed greenery behind the fountain.  I couldn’t find any way in Photomatix to adjust it away without ruining the rest of the image.  So I decided to do some editing in Paintshop Pro X3 to try and get rid of it.

I then used the Lasso selection tool set to “Smart Edge” and outlined the inside of each of the windows.  Once this area was selected, I used the Eraser tool to erase “through” the HDR to the underexposed greenery below.  The results are below:

I think the results were worth the effort!  I wouldn’t be able to enlarge this photo to its original size because the edges are not clean when you zoom in on them…I need a lot more practice, and I need to learn how to tweak the tools correctly.  But I learned a lot through this little exercise, and now I feel a little more competent with Paintshop Pro X3.  Let’s see what else I can get into!!