What a litigious society we live in!  It seems that if I want to take pictures with a cellphone or a Blackberry, no one really cares.  They won’t even bother me if I have a point-and-shoot Coolpix.  But, boy howdy (as my Southern women friends say), just go out into a public place with a DSLR, and suddenly you’re a lawsuit waiting to happen.  And God forbid you should have that DSLR mounted on top of a tripod.  Agghh…the horror!!

I wanted to do a little night shooting tonight, and I wanted to do it somewhere close to home because I was tired, but I wanted someplace that had at least some minimally interesting lighting and architectural features.  So I decided to go across the street to Glendale Community College.  You know, the campus that my tax dollars help support.

I knew they probably had some kind of restrictions about taking photos on campus, but I decided to go for it anyway, especially since I had no intention of photographing any person, at least not close-up or in a way that they would be recognizable.  And I’m certainly not making any money by doing this.

I was able to get a few shots around the Student Union building on their patio.

I liked the way the arches and the awning were underlit against the night sky, and I thought the empty Pepsi cup on the table was a nice touch.  You can tell that someone just left there to go to their night class.

Then I shot this picture of a tree with it’s multiple trunks framing the lighted campus map.  I was shooting bracketed shots at ISO 100, aperture priority, so I had some pretty significant exposure times.  When I looked at the shots, all three of the images in the bracketed series had this ghosted image of the campus map super-imposed on the tree trunk.  Not sure exactly what made that happen.  Any ideas? 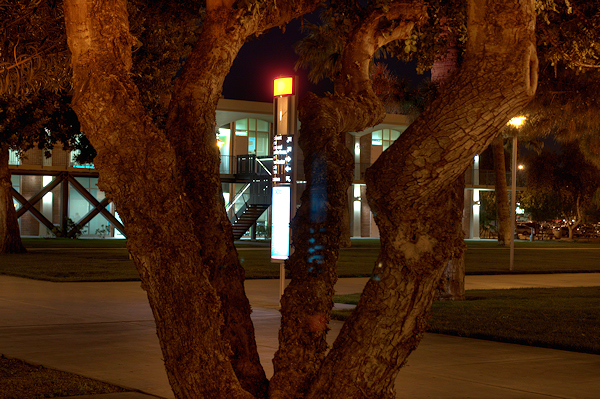 Anyway, I walked around campus a little more and when I came to the library, I just couldn’t help myself.  I knew what the answer would be, but I was just too tempted by all those books….I walked in with my camera and went to the front desk where two students were working, and I asked them if it would be okay if I took some photos in the library. (Thud!)

They, of course, had no idea how they should answer my question, so they went and got their faculty advisor.  He was very nice, but let me know in no uncertain terms that I could not shoot in the library, and should not be shooting at all on campus.  He told me he used to be a professional photographer, and then he gave me a (friendly) lecture about the importance of using model releases.

Now, I’ve heard and read about model releases, but being the naive, trusting person that I am, I just assumed that I didn’t need to worry about that since I’m just taking pictures as a hobby.  He assured me that, to the contrary, I need to get a signed release from every person that I take a picture of, or I could find myself in deep trouble if someone ever got upset about me taking their picture.  He said he always carried the release forms around with him when he went out shooting.

I rarely take pictures of people that I don’t know, and I certainly don’t intend to walk around with a stack of legal forms every time I go out to take a few photographs.  But I’m quickly finding out that I can save myself a lot of headaches if I just aim my camera at something that’s non-human, created and built by Mother Nature rather than constructed by man.  Especially if they have a marketing department.