I completely forgot to wear a coat or jacket when I left the house for work this morning, and when I left the office this evening the temperatures were in the mid 50’s and it was cloudy and breezy, so I didn’t stop to take any photos on the way home.  Instead I decided to try and salvage some of the shots from Gateway Trailhead that didn’t work well in HDR.

This first photo is one of the shots that I wound up turning into a black-and-white in HDR (see yesterday’s post):

I did some tweaking of the shot in Paintshop Pro, and while it doesn’t capture details in the highlights and shadows like an HDR photo does, I still like the way the sun rays show up on the arms of the cholla.  I like this single color shot better than the B&W HDR version.

This next shot is one of about nine consecutive exposures that I took from the same spot in the visitor’s center: 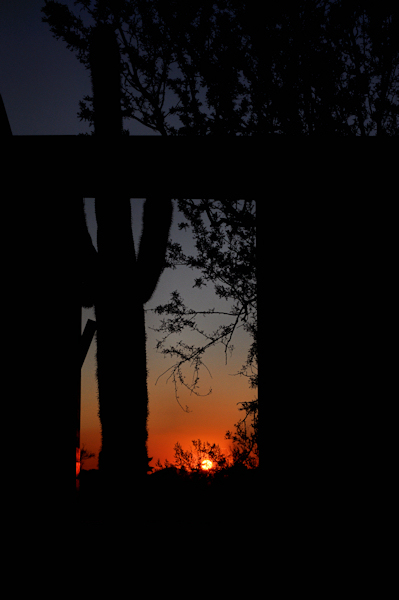 This one is the under-exposed shot in the bracketed series (-2.0 EV), which produced some gorgeous color in the sky even before any processing in Paintshop Pro.  The “frame” was the interior of the building, and on all three bracketed shots it was completely in silouette…thus the extreme noise in the HDR version.  However, this single shot turned out quite nicely, I thought.

So, I think I’m done with Gateway Trailhead for awhile now.  If all goes according to plan, we’ll be heading to Out of Africa in Camp Verde on Sunday, where I hope to get some good shots of the “wildlife”.  But until then I’ll be on the lookout for spur-of-the-moment things to shoot, and I’ll be sure to remember to take my jacket with me when I head out the door!