Yes, I know I said that I wasn’t going to take any more photos this week and concentrate instead on improving my skills in the editing software, but nature took its course this evening.  As I was driving home from work toward the west, I could see the sun setting in the southwest, but there was an intensely dark cloud gathering in the northwest–the perfect formula for a dramatic sunset.  Since I just happened to have my camera kit with me, I started looking for a good spot to exit the freeway and setup for some photos.

It took me about fifteen minutes and a couple of “dry runs” before I found a little park/trailhead just off Cave Creek Road and the 101 Loop.  I parked my car and grabbed the camera and started shooting hand-held shots as the sky turned all kinds of shades of gold, yellow, orange and red as the sun set behind the hills.  And then behind me, a rainbow appeared in the dark clouds as it started to sprinkle rain.

I tried to do some hand-held bracketed shots, but I was starting to get a few raindrops on my lens, so I had to stop and wipe it dry.  Fortunately the sprinkles didn’t last long, and I was able to get my tripod out and get some decent bracketed shots using the cable release.  As with any sunset, it’s all in the timing, so I just shot as much as I could and hoped for the best.

I processed five HDR’s using Photomatix.  Two of them use the same series of shots, but I used detail enhancement on one and exposure fusion on the other (the latter turned out better!).  Here’s a sample of what I was able to capture:

I’ve uploaded the others to my photostream on Flickr if you’d care to take look.

So then it was time to get back to the zoo pictures and test out some of the new features of Paintshop Photo Pro X3.  For today I selected one of my favorite shots of the day, these two swans who seemed to be overseeing things at the lagoon.  I took this shot as the sun was starting to set, and I used auto exposure and my telephoto lens.  The original settings were ISO 200, F4.5, 1/60 second, 99mm, no flash.

I loved the composition of the shot, but it looked a little bland and washed out to me.  I loaded the RAW file into PSP (wasn’t able to do that in the older version), and did some tweaking with the color balance, luminescence, and some local tone mapping.  Here’s the result: 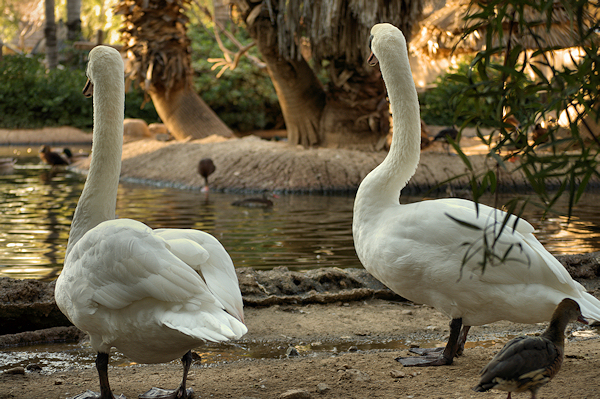 I like this so much better!  It captures the glow of the setting sun while still keeping the detail of the swan feathers, the puddle of water at their feet, and the thatched roof of the the sunshade in the background right.  It’s a warmer picture, which I think instills a feeling that the swans are lovingly watching over their flock (which may or may not be the case, but it sounds good, huh?).

Anyway, let me know what you think!  Feel free to subscribe to this blog and offer tips and suggestions as I learn more about using both my camera and the digital darkroom software!