Finally, the sun has come back out here in the Valley of the Sun, and I got to spend some quality time playing with my Nikon this morning.  I packed up my gear around 9:30 or so, making sure that I had all the important stuff like my user’s manual in my bag, and headed over to Westgate.  I’d heard that they have a farmers’ market on the second and fourth Saturdays of each month, and I thought that I might be able to get some interesting shots of the vendors’ wares, as well as the fountains at Westgate.

Since I got there fairly early, there were not that many people around, so I was able to take my time and set up my shots at my leisure.  I started out at the main fountains just in front of Jobing.com arena, taking some hand-held shots just to see what the exposures looked like, and then setting up some bracketed exposures for HDR processing later.

It was such a beautiful day!  I played around with different exposures, and pulled out my old polarizing filter that I hadn’t used in years.  It turned the sky such a deep blue, and allowed me to see right through the water in the pools to the gravel at the bottom.  The fountains are computerized to sync up with the music that’s playing, so when I shot the bracketed series, it was impossible to get exactly the same shot on each frame since the water spouts were constantly moving up and down.  But when combined into an HDR image, it seemed to work.  At one point, there was a beautiful rainbow that showed up when the fountains created a mist, and I was able to capture it quite well, I think: 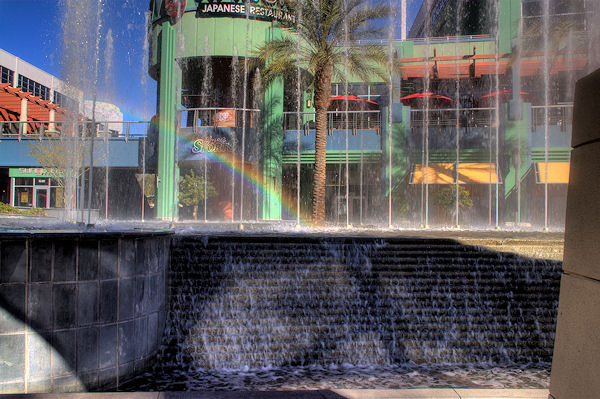 I continued taking pictures around the perimeter of the fountains.  The mid-morning light made some interesting light-and-shadow patterns on the patios of the restaurants on the plaza, especially when combined with the colors of the walls and awnings of the patio bar.  These exposures were such fun to play with in Photomatix–I came up with some shots that are on the abstract side, but the colors make me happy!! 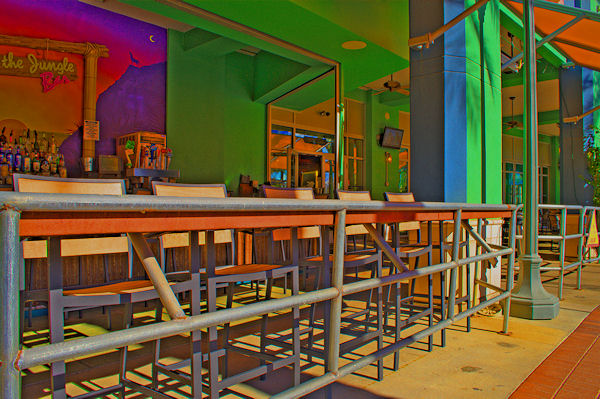 And then, my fun got ruined.  I was approached by a security guard who said, “Can I help you?”

He said, ” I hate to tell you this, but we can’t allow you to take photographs here on the property.  This is private property, and they have very strict rules about people taking photos.”

I kind of saw this coming, since I was using a tripod, and it certainly wasn’t the security guard’s fault–he was just doing his job.  We had a very cordial conversation, and I explained that I was not a professional photographer, that I wasn’t taking pictures for any type of commercial work, and that I had just purchased the camera right before Christmas and was still trying to learn to use it.

He was very understanding, and provided me with the name and phone number of the person who is in control of the marketing at Westgate.  He told me that I should give her a call to see if she would make an exception to allow me to continue taking photos. So I called her up and left her a voice message, explaining what I was doing.  In about five minutes she called back while I was still talking to the security guard.  We had a short conversation, and she said that it would be okay as long as I didn’t use the photos for commercial purposes.  At this, I handed the phone to the security guard, and she told him the same thing.  So I was free to go about my business.

Except that by that time, the fun was gone.  I knew that if I walked to the other end of the plaza to where the farmers market was being held, that some other security guard would give me the same hassle, and I’d have to repeat the process.  It just wasn’t worth it.  The first security guard told me that I could take pictures of Jobing.com arena (all I had to do was turn around and it was right there), or that I could go out to the pathetic little lake at the north end of the property and shoot pictures.  I did take a few shots at the “lake”, but they weren’t that great…not a particularly scenic view.

Once again, it comes down to the monetary value of an image.  Westgate is a multi-million dollar development that has been stalled due to the downturn in the economy.  You would think that they would welcome people taking photographs and sharing them with as many people as possible in order to drum up some business for the struggling businesses in the area.  The place has real potential, but this kind of micro-management of the “image” is counter-productive, in my opinion.  The place is supposed to be a tourist destination, and tourists take pictures.  And some tourists have good DSLR cameras and like to use tripods to get sharp pictures for their own enjoyment or to share with their friends and families.  Westgate marketers should be taking advantage of all the free publicity, not trying to stifle it!!

I have a lot of friends in marketing….but you guys need to lighten up!!