I was able to telecommute today, and as I was working from home, I was also keeping an eye on the weather outside my home office window.  From my upstairs room, I could see the sun trying to peek through the dark clouds throughout the day as the wind blew the tree branches back and forth.  At about 4:30 PM, I decided to log off the computer, and I gathered up my camera and tripod and headed toward the west in hopes that there would be a sunset worth capturing.

Today it wasn’t to be.  As I drove west in rush hour traffic, the sun completely disappeared behind the cloud cover, so it was obvious there wasn’t going to be any “glow” in the sunset.  Instead, it began to get dark even quicker, and what little dramatic lighting there had been was just about gone.  I came to a roadblock where Olive Avenue had been closed due to flooding from the past two days’ rain, so I turned around and headed back east.  In the distance I could see the silver dome of the UOP stadium shining against the dark clouds, so I headed in that direction back over to Westgate to see if I could find anything interesting in the area.  As I drove west, I spotted the Zanjero development, and decided there might be just enough light to get a couple of shots. Zanjero is (was) a beautiful development that started construction just as the economy took a dive.  It has never been occupied, but it’s still a beautiful structure, surrounded by dilapidated construction fencing and fields of sagegrass.

I set up the camera on my tripod and took several bracketed series of shots, but I felt rushed the entire time I was there.  I was in such a hurry to catch the light that I overlooked several important things:

I was just in a hurry to get the shots before the light was gone, my car was stolen, or the police arrested me for trespassing on private property.  Overall, it was way more stressful than it should have been, and not at all zen-like.

I was fairly pleased, however, with the shots that I got, considering the light that was available.  Here’s an HDR rendering of one of them that I cropped somewhat:

And here’s one that I took from a little further away: 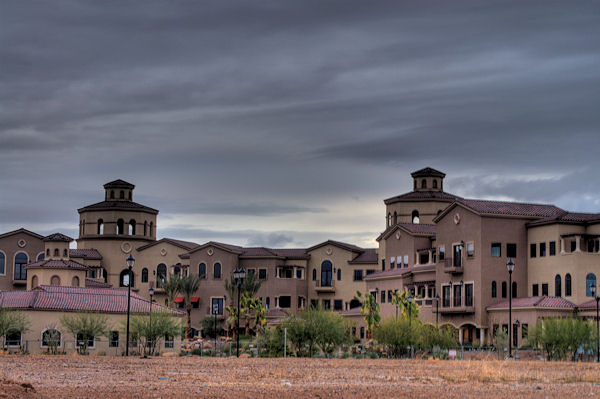 So, my lesson learned today is that I need to plan my shooting a little better.  Until I’m more proficient with my equipment, I need to plan my shooting sessions a little more in advance, allowing myself plenty of time to set up my equipment so that I can look at the results of each shot.  I need to adjust the settings, and try the shots again and again, so that I can learn how the different settings change the way the image is captured.  I need time to enjoy the experience of taking photos, otherwise this is going to become more of a chore than a pleasure.  Zen is all about being happy and present in the moment.  My goal for tomorrow is to spend at least a couple hours just taking my time and enjoying whatever I shoot.